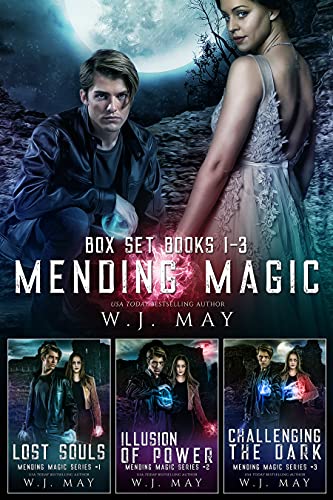 USA Today Bestselling Author, W. J. May brings you the first three books of the Mending Magic series - an anthology of magic, fantasy and romantic suspense that'll keep you reading.Your curse is your biggest strength....I just didn't know it yet.Book 1Jamie Hunt's the high school quarterback in his senior year. He's popular, smart, got the prettiest girl in the school chasing him. Everything couldn't be more perfect.But a single mistake changes everything. His new "ability" puts in the middle of a war he doesn't want to be a part of, protecting a girl he barely knows and running from the one thing he loves—his family.Book 2When Jamie and Gabrielle ran away in the middle of the night, they thought they'd be leaving their troubles behind them. Now, they're starting to realize those troubles have just begun.With no money, no plan, and no destination, they find themselves the world's most wanted fugitives—trying to stay one step ahead of an international intelligence organization tasked with hunting them down. An intelligence organization run by Jamie's own father.An opportunity presents itself, but nothing is as it seems. Alliances are strained. Powers are tested. And no one knows who to trust.How do you outrun your destiny?Book 3How do you hold back the tide?When Jamie and Gabrielle fled halfway across the world just to escape his father, the last thing they wanted was a castle full of unexpected guests. But magic doesn't discriminate, and they aren't the only teenage fugitives living on the run.Now, with a whole group of people depending on him, the stakes are higher than ever and Jamie struggles to control his powers. Tensions mount and relationships are tested as unexpected secrets are brought to light. No corner of the world is remote enough to hide, and with Obtero circling ever closer, it's only a matter of time before they are discovered.Can a group of teenagers fend off the trained killers on their trail? Can they master their abilities in time? Most importantly, is it possible to keep such a terrible secret?One wrong breath…and the game is upNever give up. Never give in.Mending Magic Series:Lost SoulsIllusion of PowerChallenging the DarkCastle of PowerLimits of MagicProtectors of Light