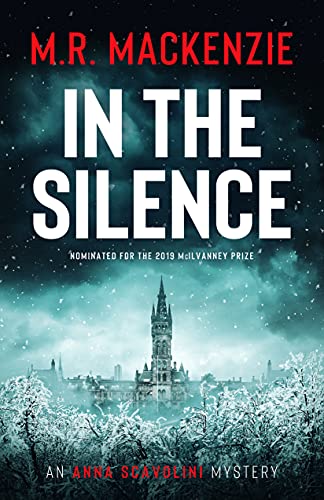 SHORTLISTED FOR THE BLOODY SCOTLAND DEBUT PRIZE AND LONGLISTED FOR THE McILVANNEY PRIZE, 2019.Anna Scavolini hasn’t set foot in Glasgow for ten years – and she’s not short of reasons…On her first night back in town, what should have been the start of a relaxing Christmas getaway takes a decidedly macabre turn when she stumbles upon an old flame, Andrew Foley, bleeding to death on the snow-clad slopes of Kelvingrove Park.Who killed Foley in such a brutal manner – and why? If the police have any leads, they’re keeping them under wraps. Convinced that Foley was deliberately targeted rather than the victim of a random attack, Anna begins her own investigation, and in so doing unearths a trail of long-buried secrets, leading back to a crime committed over a decade ago.A crime so unspeakable its perpetrators are prepared to take their silence to the grave.In the Silence is a fast-paced, compelling crime mystery which will appeal to fans of authors like Mark Billingham, Stuart MacBride and Mark Edwards.NOTE: This new edition of In the Silence has been revised to include material not present in the initial publication.Praise for M.R. Mackenzie‘Brings a fresh new voice to the field of Tartan Noir.’ – James Oswald‘Writes with precision and passion.’ – Caro Ramsay‘Splendidly written stuff.’ – Barry Forshaw, Crime Time‘An immersive slow burn of a tale, peppered with disquieting fire-crackers of revelation.’ – Morgan Cry‘Mackenzie has come up with something that defies easy definition and is truly original.’ – Paul Burke, NB Magazine‘Up there with the best contemporary authors working today.’ – David B. Lyons