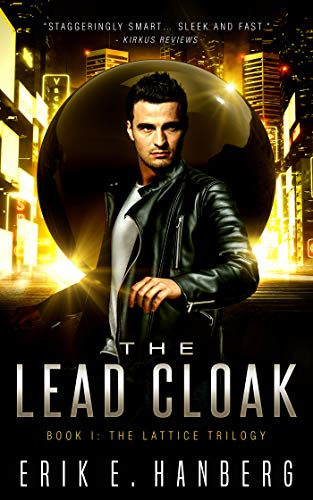 In the future, privacy is a thing of the past."Staggeringly smart… Hanberg's expertly honed storytelling is sleek and fast… [an] entertaining tale." —Kirkus ReviewsNevada, 2081. Colonel Byron Shaw safeguards the world’s innermost secrets. From a control center in Area 51, he monitors the expansive surveillance system that once saved him certain death at the hands of ruthless kidnappers. But not everyone trusts technology that peers through strangers’ eyes, so it’s no shock when a guerrilla attack nearly wipes out the network and spills his blood.Tasked with tracking down the terrorist cell, Byron sets off on a globe-spanning chase that brings him to the outer edge of Earth’s atmosphere. But as he infiltrates their ranks, a growing suspicion about the system that preserved his own life could sabotage civilization.Torn between duty and doubt, one man’s decision could rewire humanity’s future.The Lead Cloak is a tech-savvy sci-fi adventure novel. If you like high-stakes action, thought-provoking dystopian themes, and gripping twists, then you’ll love Erik Hanberg’s cerebral page-turner.